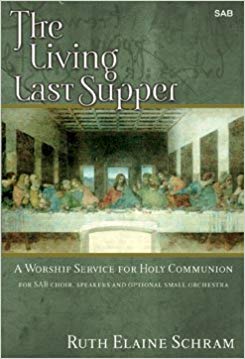 We are excited to share a recording of this year’s cantata originally presented on March 20, 2016. You can access the streamed video on our WEBSITE OR our YouTube CHANNEL on Maundy Thursday, April 9th, at 7:00 pm.  The recording will be available following the live stream if you are unable to tune in at 7:00 PM.

Notes from the Composer

For centuries before Jesus came to earth, each year when the spring harvest began, the Jewish people were instructed to remember the emancipation of Israel form slavery in Egypt by observing Passover. Ritual prayers of blessing were learned and recited. All leaven was removed from the house, a specific set of goods were prepared on dishes used only for this occasion, and a ceremony was performed by each family through which the story of the Exodus was retold. The instructions for the Passover Feast were given to Moses before the Ten Commandments! It pre-dates all other feasts, and its importance was made clear when Jesus chose to celebrate this feast during His last hours.

The Passover Supper is rich with beauty and symbolism, but its significance is lost on many Christians today. The unleavened bread represents the sinless Savior; it is broken and half  hidden away, representing His death and burial; it is later uncovered and eaten. Many families involve the children in the story by making a game of hiding and searching for the bread. The Matzo bread used for this ceremony is grilled, so it has stripes that remind us that Jesus was beaten; it has holes in it, which remind us that He was pierced. When Jesus says to His disciples, “this is my body,” it gives the bread a whole new level of meaning. The blood of a lamb figures heavily into this ceremony as well. In Egypt, the Israelites painted their door posts with the blood of a spotless lamb. When the angel of death saw this, he “passed over” those homes and spared the first-born for the last of the ten plagues-the plague of death. When John refers to Jesus as “…the Lamb of God who takes away the sins of the world,” it becomes clear that the Israelites had been presenting a picture of Jesus’ death, burial, and  resurrection for 1500 years before His birth by celebrating Passover.